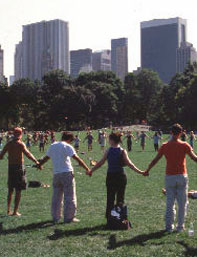 In 1975, Chester Hartman typed a letter to about 300 planners and activists, including members of the recently defunct Planners for Equal Opportunity. This was the first Planners Network newsletter, run off on a mimeograph machine and mailed out.

“This is the first mailing of a new communications/action network of leftist planners in the U.S. and Canada. At the first level, the idea simply is to put the few hundred North American ‘radical planners’ in regular touch with one another, to share ideas and experiences, discuss their work and lives, develop some sense of community and mutual support.”

These were heady times. The newsletter exchanges debated radical and socialist alternatives to mainstream urban planning. The Vietnam War was over, the last major anti-colonial struggles were being won in Africa, and détente between the U.S. and the Soviet Union brought optimism about peace and alternatives for social justice. In Europe, the welfare state was strong. In the U.S., the civil rights movement had killed Jim Crow and affirmative action was very much alive. Many Networkers celebrated the end of the federal urban renewal program, which they had fought as the first “advocacy planners”.

The PN newsletters, usually published bi-monthly, contained notes from members about their work, news about conferences, publications, and other resources. Chester Hartman did most of the work, and received small individual grants and member contributions.

The first move toward making PN an organization came at the 1979 conference on progressive planning at Cornell University. The first PN conference was held in 1981 at the National 4-H Center outside Washington, DC. A formal statement of principles was adopted, several working groups were set up and a steering committee formed. In 1985 PN issued a “Call for Social Responsibility in the Planning and Building Professions” that spoke out against nuclear weapons, cutbacks in social spending, the aggressive U.S. foreign policy, and for economic and racial justice at home. Another conference was held in 1986, and since 1994 conferences have been held almost every year, with venues in Washington, DC, East St. Louis, Brooklyn, Pomona, Toronto, Lowell, Amherst, and New York City. PN conferences are planned with the involvement of local communities and encourage participatory workshops.

Throughout the course of PN’s history, members have organized local activities such as forums, conferences and campaigns. In 1975, Networkers in New York City started a forum series that continues today. There have also been local activities in Boston, San Francisco, Los Angeles, Chicago, and Toronto. Today chapters are forming in many other U.S. and Canadian cities.

In 1995, Chester Hartman turned over the newsletter and coordination of PN to a new Steering Committee. The newsletter and membership list moved to Pratt Institute in Brooklyn. A website and listserv were started. The bi-monthly newsletter gradually expanded to contain more and more articles and features. In 2002, the printed newsletter was converted to Progressive Planning, a quarterly magazine under the direction of an editorial board and volunteer staff. Shortly after launching the magazine, we realized the need to bring back the networking that happened with the newsletter, and launched the PN e-newsletter for members.

In the three decades since PN’s founding, the political spectrum has moved radically to the right. The left and progressive movements in North America have become more diverse, and so has PN’s membership base. Today PNers work in a broad array of disciplines, focusing on issues of race, gender, sexual orientation, and environmental justice as they relate to the physical, economic and social environment of cities and rural areas. The constant objective throughout PN’s history has been to advocate that planning be used to eliminate inequalities and promote peace and racial, economic and environmental justice.

For a timeline of Planners Network events click here.